“We are excited to be the first public library in Monroe County to offer the Brody WorkLounge,” said Reilich in a statement. “The Quiet Study Area at the library is a place where our residents come to focus and concentrate, away from the distractions of everyday life. These 16 new units are built for the 21st century - equipped with electricity and an adjustable workspace that will allow visitors to take better advantage of the library’s free and fast WiFi connection.”

The Brody WorkLounge line of Steelcase furniture was a 2015 Best of NeoCon® award winner in the Education Solutions category. The main work surface is positioned on a swiveling arm, allowing users to position reading material and personal device screens at eye level. Each unit includes an integrated chair and incorporates a storage space for personal items, a side surface that can act as an arm rest, and an electrical outlet for charging personal devices.

This morning, on the anniversary of the attack on Pearl Harbor, Greece Town Supervisor Bill Reilich will unveil a historic marker for an important manufacturing site of ocean-going ships for the United States Army during World War II near the corner of Dewey Avenue and Ling Road.

The William G. Pomeroy Foundation contributed funds and worked together with the Town of Greece to help make this sign a reality. An unveiling of the historic marker will take place at the former site of the Odenbach Shipbuilding Corporation today, December 7th at 11:00 AM.

John H. Odenbach owned the Odenbach Shipbuilding Corporation, which broke ground in 1942. At its peak, the plant employed over 1,500 people and produced over fifty coastal tankers and derrick barges before the end of the war in 1945.

In conjunction with the sign unveiling, the Odenbach family has graciously gifted the town a large model ship that will be on display at the Greece Community and Senior Center. The Greece Historical Society is currently featuring a display of the Odenbach Shipbuilding Corporation that will be moved to the Town of Greece Library for the month of January.

“I am thrilled to unveil this historic marker that the Town of Greece has been awarded through funding from the William G. Pomeroy Foundation,” said Supervisor Reilich in a statement. “The Odenbach Shipbuilding Corporation played a significant role during a critical time in our nation’s history and it deserves to be recognized for its importance.”

Supervisor Reilich was pleased to announce that in addition to the Latta Rd. repaving project, the New York State Department of Transportation has announced plans to resurface West Ridge Road between Route 390 and Dewey Avenue in the Town of Greece beginning in the Spring of 2016. The section of West Ridge Road and the railroad crossing east of Carlisle Street will be milled and resurfaced, and sidewalks and ramps will also be repaired.

Access to all businesses and residences will be maintained throughout the project. Traffic will continue to use West Ridge Road during construction. Multi-lane closures will be limited to off-peak hours and much of the work will be conducted at night. Construction on this project is expected to be complete by October 2016.

“Ensuring the reliability of our infrastructure is at the core of providing safety to our residents while travelling,” said Reilich. “These improvements are greatly needed and I know our residents will benefit once the projects are completed.”

Greece Town Supervisor Bill Reilich received the Public Service Award today for his dedication to parks and recreation services at the annual Genesee Valley Recreation and Parks Society Conference and Awards on November 20th, 2015. GVRPS is a professional organization comprised of officials, educators and professionals in the area of parks, recreation and conservation for the Genesee Valley Region of New York. The Public Service Award is given annually to an individual elected or appointed to public office, at any level of government, who has provided unselfish service for at least three years on behalf of the residents in their area in the interest of parks, recreation, conservation and/or community services.

Supervisor Reilich was given this award based upon his long term support of parks and recreation initiatives, dating back to his term as New York State Assemblyman through his work as Supervisor for the Town of Greece.  In his time in the Assembly, Mr. Reilich supported several initiatives from park amenities to securing funding for the Pineway Ponds Splash Pad in Ogden.

In his role as Town of Greece Supervisor, Mr. Reilich has worked to update the Parks Master Plan to survey residents as to their priorities of parks amenities. Through the use of the parks trust fund and securing several grants, Supervisor Reilich along with his team cut the ribbon on the largest municipal splash pad in the Western NY region. In addition to these initiatives, Supervisor Reilich has brought back a hugely successful Old Fashioned Fourth of July Celebration at Town Hall, secured funding and opened six Pickleball only courts, opened a state of the art entertainment pavilion for outdoor concerts and events, and initiated plans for a new lodge at Braddock Bay State Park.

Supervisor Reilich and Greece Chamber President Sarah Lentini are proud to stand behind Small Business Saturday 2015. On November 28th, small locally owned independent businesses will participate in this growing annual event.  Last year, consumers who were aware of Small Business Saturday spent a total of $14.3 billion. Nearly 3,000 Neighborhood Champions around the country rallied local businesses and created events and activities in their communities.

“It is crucial for communities to come together and support locally owned businesses” said Supervisor Reilich in a statement. “A success for these businesses is a success for our local economy, and a success for our community as a whole. Small Business Saturday is an excellent initiative to promote these shops, and one that I am proud to support.”

To learn more about this program please visit ShopSmall.com/SBSCoalition

Greece Supervisor, Bill Reilich released his proposed 2016 budget for the town which holds the line on property taxes, reduces spending for the second straight year, and utilizes no reserve funds.

“Two years ago, I set the goal of eliminating the use of reserve funds to balance the budget,” said Supervisor Reilich. “The budget that I inherited in 2014 used over $5,100,000 of reserves. I knew this practice was not sustainable and that the town’s reserve funds would have been exhausted within three years.” Reilich added, “I am pleased to say that my goal has been met; working with my department heads and the employees throughout Town Hall the 2016 budget does not propose to use any reserve funds.

”The proposed 2016 budget reduces appropriations by more than a half million dollars over last year’s budget.  “We’ve continued to press for greater efficiencies in the town’s operations, and I’m pleased to say that we’ve made further progress in that regard,” said Reilich.  The 2014 tax rate was $6.3434 per thousand and the proposed 2016 budget tax rate will be $6.3392, actually a very slight decrease.

Some of the key components of the proposed 2016 budget include:•    The elimination of 29 vacant positions, most part time and seasonal. This brings the total reduction in positions to 46 over the past two years.

•    The tax levy remains below the state tax cap, ensuring that residents will receive their state rebate checks.
•    Maintains all current programs and services.
•    Allows for the construction of a new police headquarters at the Town Hall Campus.
•    Includes the acquisition of all street lights within the town from RG&E which will generate significant future savings to the town.
•    Allows for the construction of a new lodge at Braddock Bay Park.

Our 2016 proposed budget will show that we are spending only what the town takes in.  While we successfully reduced the size of our overall budget, we have still have made the addition of quality of life amenities a priority.  In 2015 we saw the completion of the Town Hall Pavilion, this has attracted thousands of residents and was used to host our Summer Concert Series, Senior Lunch Events, National Night Out and 4th of July Festivities as well.  We were pleased to also open our 6-court pickle ball area.  This amenity has been utilized for recreational and league play as well.  This winter plans are underway to have community ice skating at the site of the pickle ball courts.  Likely one of our most frequented additions has been the Spray Park.  It is the largest in Western New York and we will continue to look for ways to enlarge it and add additional amenities for those visiting.  We also installed a handicapped accessible boat launch at Braddock Bay Marina – this amenity saw a lot of use this past boating season and we are certain that with the changes and improvements for navigation that will be happening at the marina it will be in even more demand.  Reilich added, “My first two budgets have gone a long way towards ensuring our town’s long-term financial stability.  We’ve continued to pursue savings by refinancing older bond issues to take advantage of the current low market rates.  Our last reissue will save more than $300,000 in interest payments over the life of the bonds.”

Reilich continued, “We’ve been able to limit our increases in Health Insurance costs by negotiating greater contributions from our employees.”

A public hearing on the proposed budget is scheduled for Wednesday, November 10th at 5:30 at the Greece Town Hall.

Construction is set to begin this winter on the $9.5 million Braddock Bay Wetland Restoration Project. The project, which is funded through the Great Lakes Restoration Initiative, will restore and protect regionally significant wetland habitat while improving boater access to Lake Ontario.

The U.S. Army Corps of Engineers has asked the Town of Greece to help inform hunters and the general public of some temporary restrictions which must be honored in the interest of safety. Due to construction activity and the presence of construction workers in Braddock Bay, hunting will be temporarily prohibited in certain areas beginning January 1, 2016. The restrictions will mainly affect waterfowl hunters in the late waterfowl hunting seasons this winter, and for portions of the fall 2016 waterfowl hunting season.

This work is critical to protect and restore the integrity of Braddock Bay wetlands and the habitat that they provide for fish and wildlife. If you have any questions please send them to This email address is being protected from spambots. You need JavaScript enabled to view it.l. For more information on this project please visit: 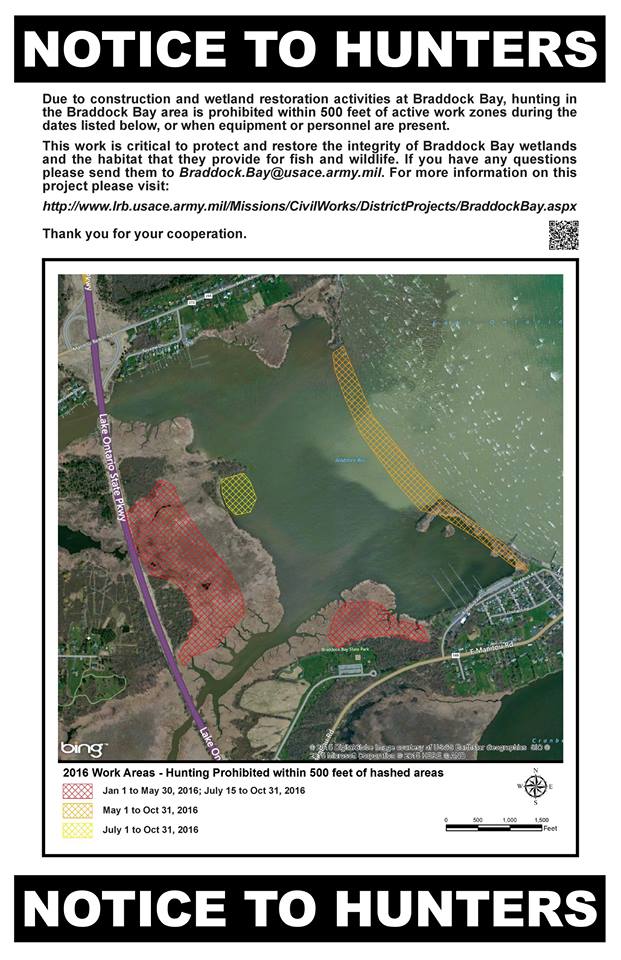 Thursday, October 1st will mark the last payment on the Town Hall building at 1 Vince Tofany Blvd. The original bond was issued in 1998 for a period of seventeen years. Greece Town Hall remains one of the most modern government buildings in the county, and is the centerpiece of a complex that has recently seen the additions of a new pavilion, pickleball courts, and a splash park.

The retirement of this debt coincides with the plan to build a new police station so as to minimize the budget and tax impact. The new Greece Police Headquarters will also be located on Town Hall Campus.

A public drop-in session will be held at Greece Town Hall in Community Rooms A & B, from 4:00 PM to 7:00 PM, on Tuesday September 22, 2015 to review inventory information and gather public comments on the Hojack Trail Feasibility Study. The study, which is funded by the Genesee Transportation Council, is a collaborative effort by the towns of Greece and Parma, and the village of Hilton which will study the possibility of establishing a multi-use trail on the former Hojack rail corridor, extending from the NYS Route 390 Bike Path in Greece to Canning Street in Hilton.

The drop-in session will give residents of all 3 communities an opportunity to provide input on the study and discuss the project with the advisory committee, project consultants, and representatives from Greece, Parma, and Hilton.